Which California Team Offers the Most Rewarding Experience for an NBA Fan?

With the 2022-23 NBA regular season under way, and the Golden State Warriors looking to repeat as the league’s champions in the year ahead, it’s easy for Californians to sit back and take their good hardball fortunes for granted.

Since the dawn of the 21st century, the Golden State has doubled up the next closest state in terms of NBA Championships won, with the L.A. Lakers and Warriors combining to capture 10 titles over the last 20-plus years.

That is five more than the next closest state (Texas, with five titles), with Florida being the only other state with multiple NBA titles during that timeframe.

BetCalifornia.com developed a ranking system of the 30 NBA teams to find what fanbase
has been rewarded the most over the last 11 seasons.

The first category — “Minutes Spent Per Win” — was determined by taking the amount of regular season games played by each team (from 2011-12 season to 2021-22 season) multiplied by the average length of an NBA televised game (2 hours, 13 minutes). Once we calculated that number, we divided it over the number of wins during those same seasons to arrive at the minutes watched by fans per regular season win over the last 11 seasons.

The second category — “Points Deducted for Playoff Success” — was utilized to decipher the value of seeing playoff success during those 11 seasons gathered in the first category. The point values were 1 point per playoff berth, 3 points per playoff series win, 3 points per NBA Finals appearance, and 15 extra points for NBA Championship win. After adding all the points together for every postseason from 2011-12 season to 2021-22 season, the points were deducted from Category 1 to arrive on the final points and rankings.

Here's where the state of California’s four NBA teams and their fans rank on that list.

There is currently no legal California sports betting, and two initiatives on the November ballot that would legalize some form of sports wagering are lagging at the polls. 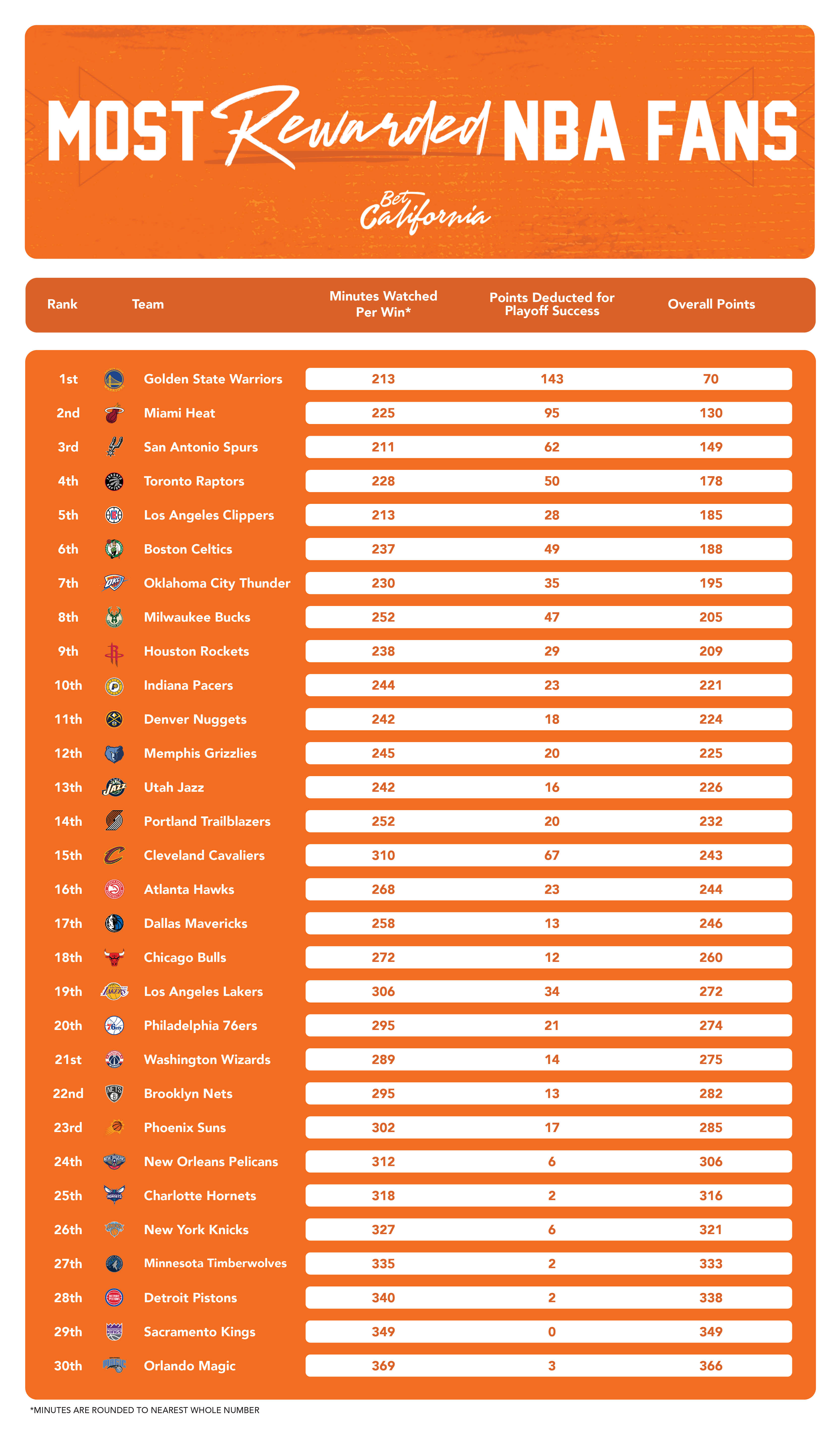 Warriors, Clippers Fans Among Most Rewarded in NBA

Unsurprisingly enough, the Warriors and their fans are the most rewarded in the league, based on our metrics.

In total, Warriors fans need to only watch their team 213 minutes per win. Pair that with 143 points in postseason success, and Golden State netted 70 points in our formula — by far the best in the NBA.

Coming in at No. 5 were the L.A. Clippers, who notched 213 fan minutes per win. But with much less playoff success — 28 points worth — the Clippers were more than 100 points behind the Warriors.

Fans of the L.A. Lakers finished 19th, which makes sense as the franchise’s regular season struggles (306 minutes of viewing per victory for fans) has been balanced by the 2020 NBA title.

Bringing up the rear were the Sacramento Kings, who finished 29th out of 30 teams with 349 points.

Sacramento last made the NBA Playoffs in 2006, representing the longest postseason drought in the 30-team league.

Entering the 2022-23 season, oddsmakers at BetMGM give the Warriors the best odds (+300) of repeating as Western Conference champs, while the Clippers are No. 2 on the list at +325, and the Lakers are fourth at +550.

The Kings, meanwhile, are tied with the Houston Rockets, Spurs, and Oklahoma City Thunder for the longest Western Conference odds at +25000.

When betting does become legal in the state, BetCalifornia.com will be the place to go for California sportsbook promos.

As far as Pacific Division odds are concerned, BetMGM has the Warriors (+175) and Clippers (+200) atop the table, with the Lakers currently holding the fourth-best odds at +800, and Kings sitting in last at +25000.