The Odds of Owning a Home in California

Owning property and being able to call your home your own in the Golden State is its own form of "California Dreamin'".

But in a state with one of the least affordable costs of living in America, The Mamas & The Papas may have overhyped your odds of being able to buy a home in California.

To determine your odds of owning property in the Golden State, we considered a series of factors, including:

Ranking each state for each factor, we were able to reveal where California places among the easiest regions to purchase property.

California sports betting is not legal, but in the meantime look to this site for more research items such as this, as well as any and all progress to legalization.

According to our research, with an overall index score of 18.3 out of 100, California is among the hardest states to buy property in. In fact, the Golden State ranks second from the bottom ahead of only Hawaii (16.8), and just below New York (32.3).

Notably, there’s also a sparsity of households per 1,000 California residents, with just 328 currently, far below the national average of 374.

This may, in some part, be linked to California being America’s most populated state, with almost 40 million people living here.

Additionally, California has a relatively low rate of home ownership, with just 54.60% of people owning property here, the joint-lowest of all states.

Finally, however, house prices across California are rising faster than the average rate (58.62%), with the typical property here worth 63.10% more in 2022 than five years ago. 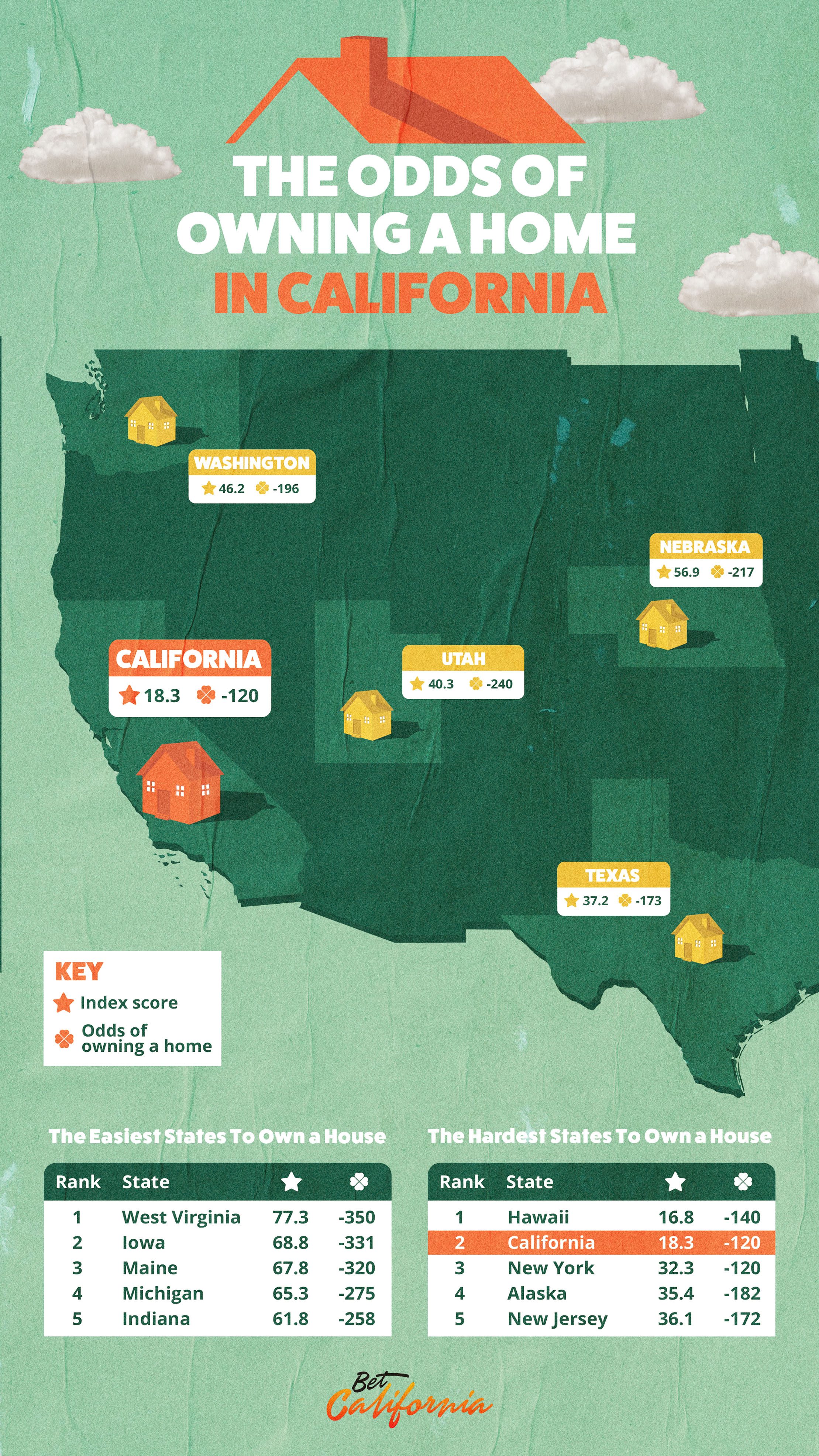 What are Your Odds of Buying a Home in California?

California ranks among the toughest states to buy a home, with an overall home ownership rate of just 54.60%, joint bottom with New York and just below Nevada (59.70%) and Hawaii (58.30%).

However, despite this, your chances of becoming a California homeowner are generally favorable, with moneyline odds of -120. This means, statistically, you’re a bit more likely to be able to afford property here than not!

Stay close to BetCalifornia.com on the road to sports betting and for the top California betting promos.

To determine the how easy it is to buy property in California, we considered four different factors for each state:

Data for these factors was collected and normalized, to give each factor an indexed value between 0 and 1. These values were then summed, to provide a total score out of four for each state. The states were then ranked from highest to lowest based on this score.

To determine your odds of owning a home in California, we looked at the home ownership implied percentage and equivalent moneyline odds.